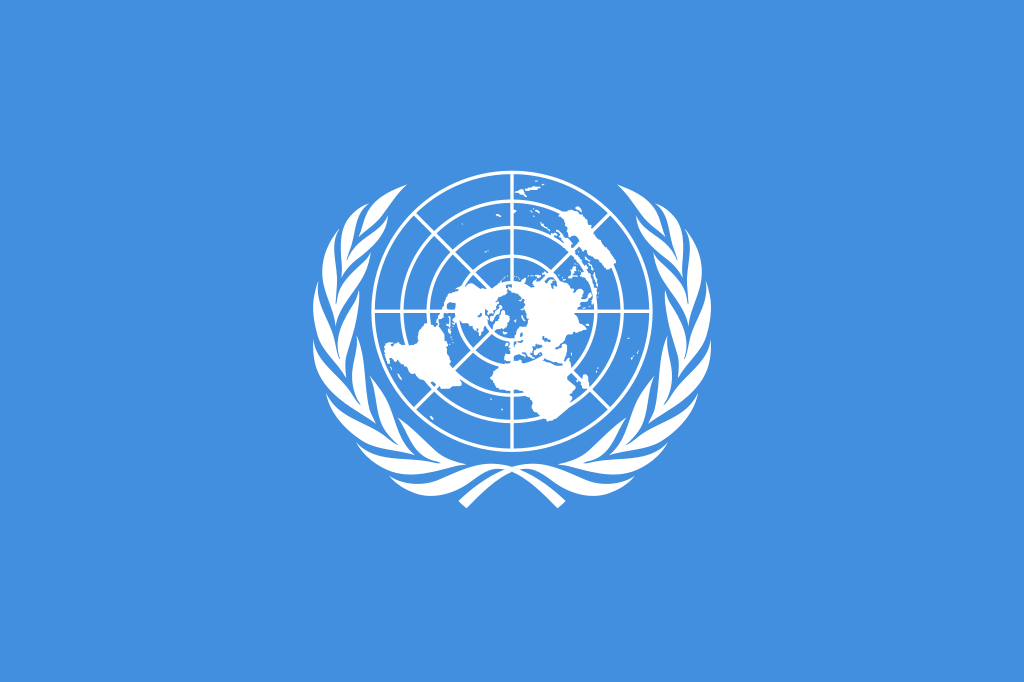 7th May 2019
To: His excellency
Sr. Emilio Rafael Izuierdo Miño
Ambassador
Permanent Representative
Permanent Mission of the Republic of Ecuador
Before the Office of the United Nations and other international organisations in Geneva

I would ask that this communication be sent to in the shortest possible time to his Excellency José Valencia, Minister of External Affairs and Human Mobility.

Mandates of the Working Group on Arbitrary Detention of the Special rapporterur on the promotion and protection of the right to freedom of opinion and expression; of the Special Rapporteur for the Freedom of Expression InterAmerican Commission of Human Rights of the Organisation of American States.

We have the honour of directing to you in our status of Working Group on Arbitrary Detention; Special Rapporteur on the promotion and protection of the right to freedom of opinion ad expression; and Special Rapporteur for the Freedom of Expression of the Inter-American Commission of Human Rights of the Organisation of the American States (CIDH) for approval of resolutions 33/30 and 34/18 of the Human Rights Council and article 41 of the American Convention on Human Rights.

In this context, we wish to point the urgent attention of the government of his Excellency to the information that we have received in relation to the arrest, detention and the criminal accusation against Mr Ola Bini in Ecuador.

According to the information that we have received:

Ola Bini, of Swedish nationality, is a computer programmer, specialist in matters of cyber security and privacy. Also he has an activist and spokesman in the social media communication about matters related to his profession. He is a founder of the Centre of Digital Autonomy, a company that provides assistance, without profit, to individuals and organisations of civil society, including journalists,that find themselves in a risky situation, helping them to secure their communications. As part of his work, Mr Bini knows and has meetings with people that are exposed politically, such as activists and leaders of social movements. He has been open in his support of cyber security and privacy, including the importance Free Software and the encryption of communication. What’s more, Mr Bini has maintained a personal friendship with Julian Assange. However, he is not professionally affiliated either with him or with Wikileaks.

Mr Bini was detained by officials of the Unit of Investigation of Technological Crimes of the National Police on 11 April 2019, in the Mariscal Sucre airport, when he was about to travel to Japan for sporting purposes. Planned a month in advance. When he was detained, the officials identified themselves with an arrest warrant, not against Mr Bini, but against a Russian citizen. When the lawyer of Mr Bini, much later, made contact with the captain of the Unit of Investigation of Technological Crimes in charge of the process, the captain denied that Mr BIni had been detained. The request of the lawyer to communicate with or see his client had been denied. The lawyer was able to undertake a phone call with Mr Bini through his personal mobile, to give him basic legal advice. Afterwards, the captain informed him that Mr Bini would be transferred to the Unit of Flagrancy in Quito and that the lawyer would be able to meet with his client there.

The detention for investigative purposes against Mr Bini had been ordered on 11 April at 22:04 by an urgent act. Around midnight of the same day, the authorities had raided his home. After the raid, the National Police announced on social media the content of the confiscated material that included USB drives, mobile devices, computers and books. After the raid, Mr Bini was transferred to an empty building where the Judicial Police had their offices until 2013.

On the morning of 12 April, a police agent informed the lawyer of Mr Bini that his client was still detained in the airport and that he was to be transferred to the Unit of Flagrancy. After various failed attempts, the lawyers were able to have the first private meeting with their client at 10:00 in the Unit of Flagrancy, with the help of the Swedish consulate. The lawyers could see for the first time the arrest warrant for investigative purposes in the afternoon of the same day.

At the hearing of the formulation of charges, on 12 April, the judge ruled that the arrest and detention were not illegal, that the prosecutor had sufficient motives to investigate the charges against Mr Bini, that Mr Bini should be subjugated to preventive prison and that his assets would be frozen. The charges were based on article 232 of the Comprehensive Criminal Law of Ecuador. It alleges that the only material fact that the criminal accusation and preventive detention are based on are the outgoings in Internet Services, travel schedules and confiscated material taken from the raid of the living place of Mr Bini.

Without pretending to prejudge the alleged facts, we wish to express our disapproval, particular, because the arrest and the charges against Mr Bini seem to be connected to the public support and his friendship with Julian Assange, as well as with his work and activism in the field of privacy.

We recall the obligations of the State under the International Pact of Civil and Political Rights (PIDCP) article 19 that Ecuador ratified on 6 March 1969, as well as the current obligations of Ecuador in light of the American Convention on Human Rights (CADH) article 13 that Ecuador ratified on 8 December 1977. In the report of the Special Rapport of the United Nations on the promotion and protection of the right to freedom of opinion and expression of 2015, the Rapporteur stated that “the encryption and anonymity, and the underlying security concepts, afforded to the privacy and security that you need for the exercise of the right to freedom of opinion and expression in the digital era” (A/HRC/29/32 paragraph 56). In front of any measure that could affect the exercise of freedom of expression through the Internet, the States should guarantee the fulfilment of the international standards that have, amongst other things, that all restrictions that can affect this right should be provided for by the law in the most clear and precise terms as possible, to pursue a legitimate aim recognised by the international right and to be necessary to reach said aim (tripartite test). When it comes to limitations imposed by criminal norms, the Interamerican Court has pointed out that, additionally, it must satisfy the requirements of the principle of strict legality (OEA/Ser.L/V/II CIDH/RELE/INF paragraph 120 and 122 and A/HRC/29/32 paragraph 56.) About the particular, we recall that the arrest, the detention and prosecution of individuals for exercising their human rights constitutes a violation of obligations of the State under PIDCP articles 9 and 19, and also under the obligations concurrent of Ecuador in light of CADH articles 7 and 13.

Further, we express our concern about the circumstances that surround the arrest and detention of Mr Bini. In this context, we recall the right to freedom and the security of the person established in article 9 of the PIDCP as well as the concurrent obligations of Ecuador established in article 7 of the CADH, prevents the State arbitrarily depriving persons of their liberty, also prevents detention in violation of the “procedures established by the law” internal of the State. Thus, the detention without a court order could constitute an arbitrary prevention of liberty, contrary to PIDCP and the CADH.

Furthermore, we recall that any person detained must be informed, at the moment of his arrest, of the reasons of the same and notified, without delay, of the accused formed against him, according to articles 9(2) of the PIDCP and 7(4) of the CADH. The authorities must provide sufficient information so that the person can challenge the motives of the arrest. The lack of information about the facts on which the criminal accusation is based could be contrary to the requirements of article 9 of the PIDCP and article 8 of the CADH. We also observe that, under articles 14 of the PIDCP and 8 of CADH, this right implies that the details of the accusation formed against the accused should be delivered promptly, that is to say, in the moment that the person is accused of a criminal offence. Based on the information received, the details about the facts on which the charges are based, received by Mr Bini and his lawyers during the hearing of the formulation of charges, they do not comply with the requirements established in Article 14 of the PIDCP and Article 8 of CADH.

Finally, we make reference to the allegation that Mr Bini was not detained in an official place of detention on 11 April and that he was repeatedly denied access to his lawyers. On this point, we express our concern for the alleged lack of safeguards to prevent the violations of rights in light of PIDCP and CADH (see, for example, CCPR/C/GC/35 paragraph 58).

The complete text of norms contained in the international instruments that we allow ourselves to remember and of the international standards applicable is available at www.ohrchr.org y can be provided if required.

Bearing in mind the urgency of the case, we would welcome a response from the Government of His Excellency about the actions undertaken to protect the rights of the person previously mentioned.

It is out responsibility with the mandates that we have been granted by the Human Rights Council and by the CIDH, to aim to clarify the allegations brought to our attention. In this sense, we would be very grateful to count on your cooperation and your observations about the following points:

Awaiting your response, we wish to urge the Government of His Excellency to adopt all of the measures necessary to protect the rights and freedoms of the person mentioned to investigate, process and impose the appropriate sanctions to all responsible for the alleged violations. We wish similarly to urge the government to take all effective measures to avoid such acts, that have occurred from being repeated.

The Working Group on Arbitrary Detention wants to clarify that, once it has transmitted a communication to the government, it can also transmit the case through its ordinary procedure with the aim of issuing an opinion about the arbitrary character or not of the deprivation of liberty. This communication in no way prejudges the opinion that could be issued by the Working Group. The government should respond in a separate form joined to the communication and to the ordinary method.

We have the intention of public expressing our concerns in the near future, as we consider that the information received is sufficiently reliable to indicate that there exists an issue that justifies immediate attention. Also, we consider that the public opinion has to be informed about the potential implications in relation to the allegations mentioned above. The press release will indicate that we have been in contact with the Government of His Excellency to clarify the relevant questions.

This communication and all received responses of the Government of His Excellency will published through the communications website within 60 days. Also it will be available afterwards in the report that will be presented to the Human Rights Council

This is the letter submitted from the UN to the Government of Ecuador: 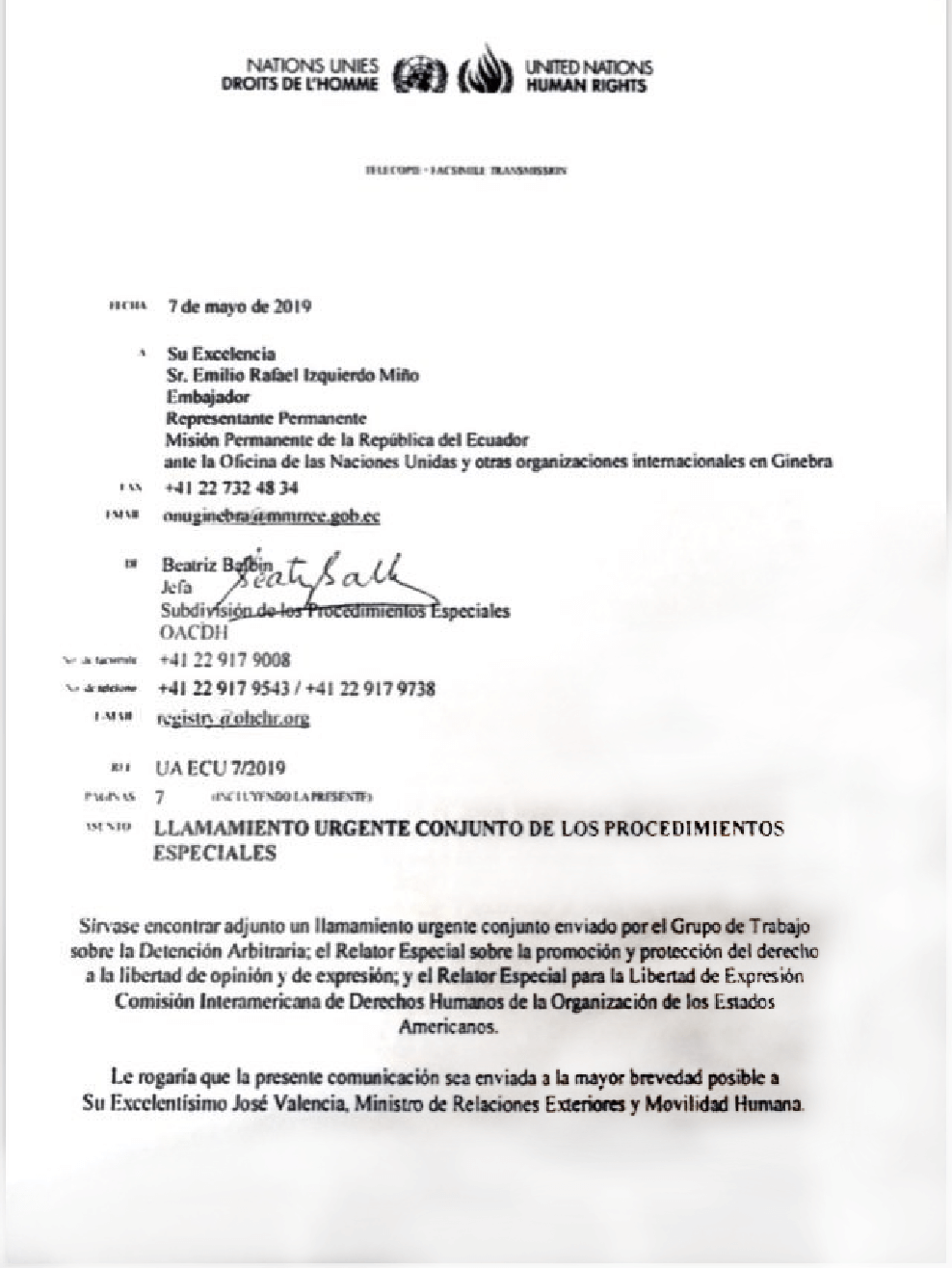 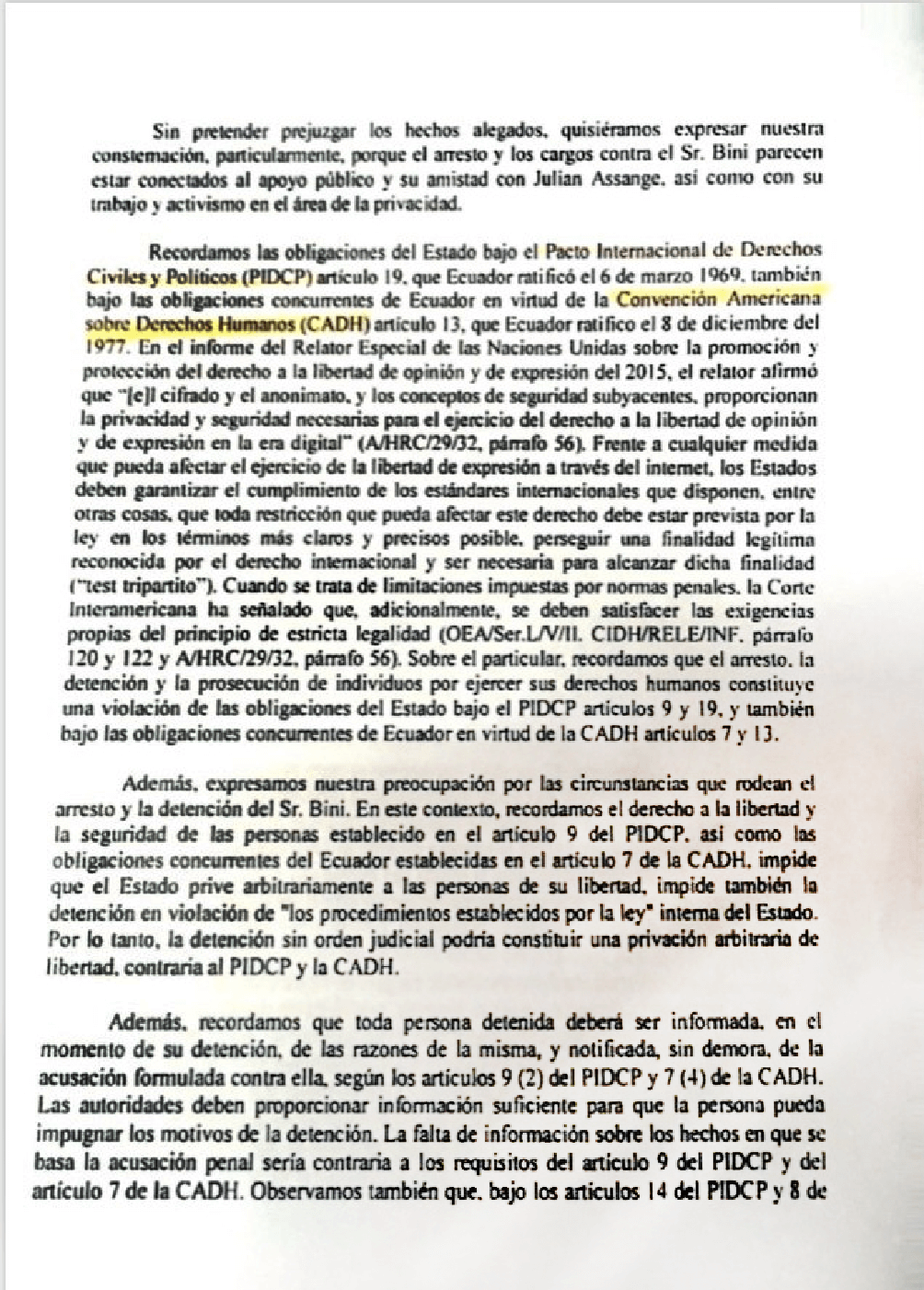 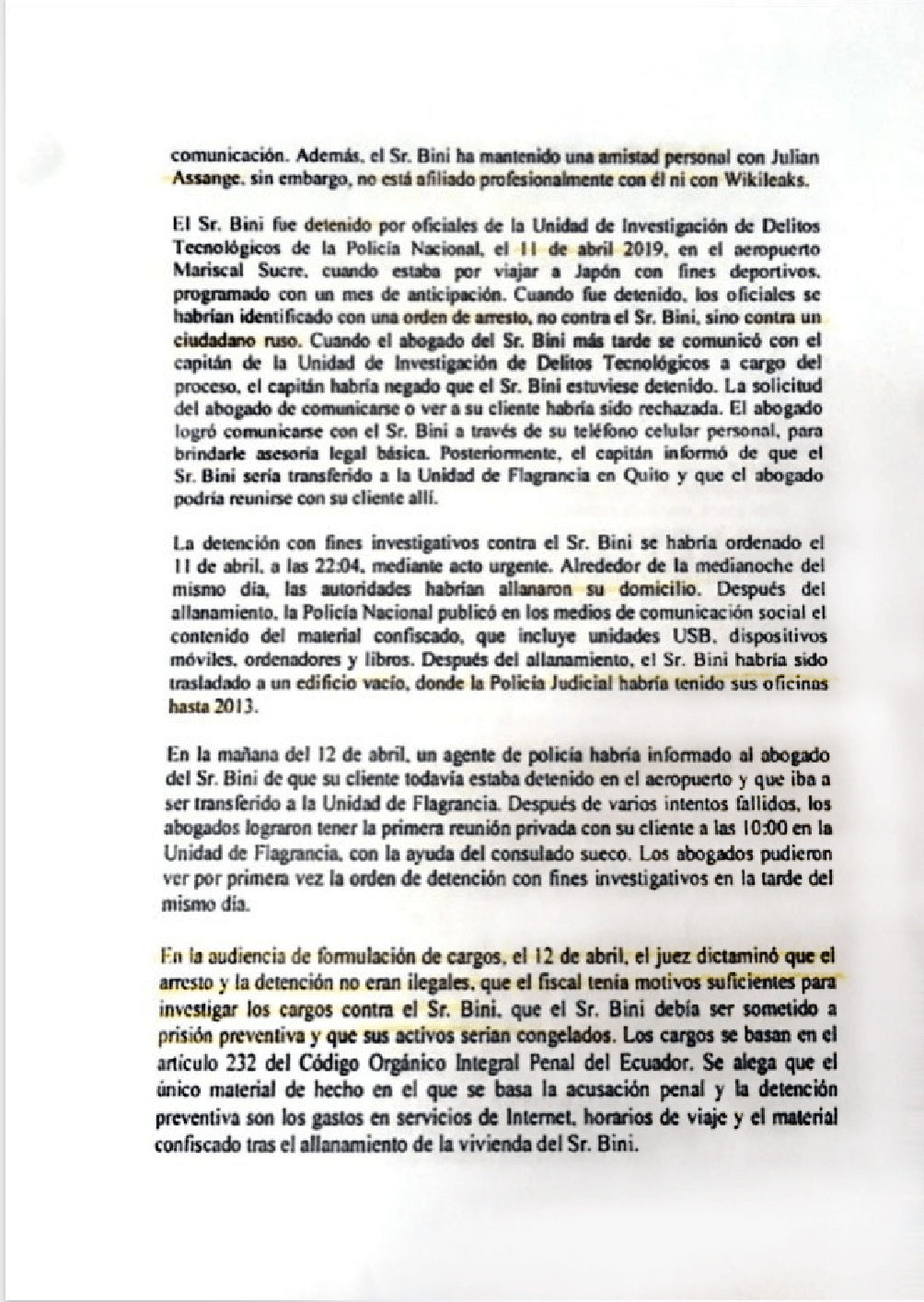 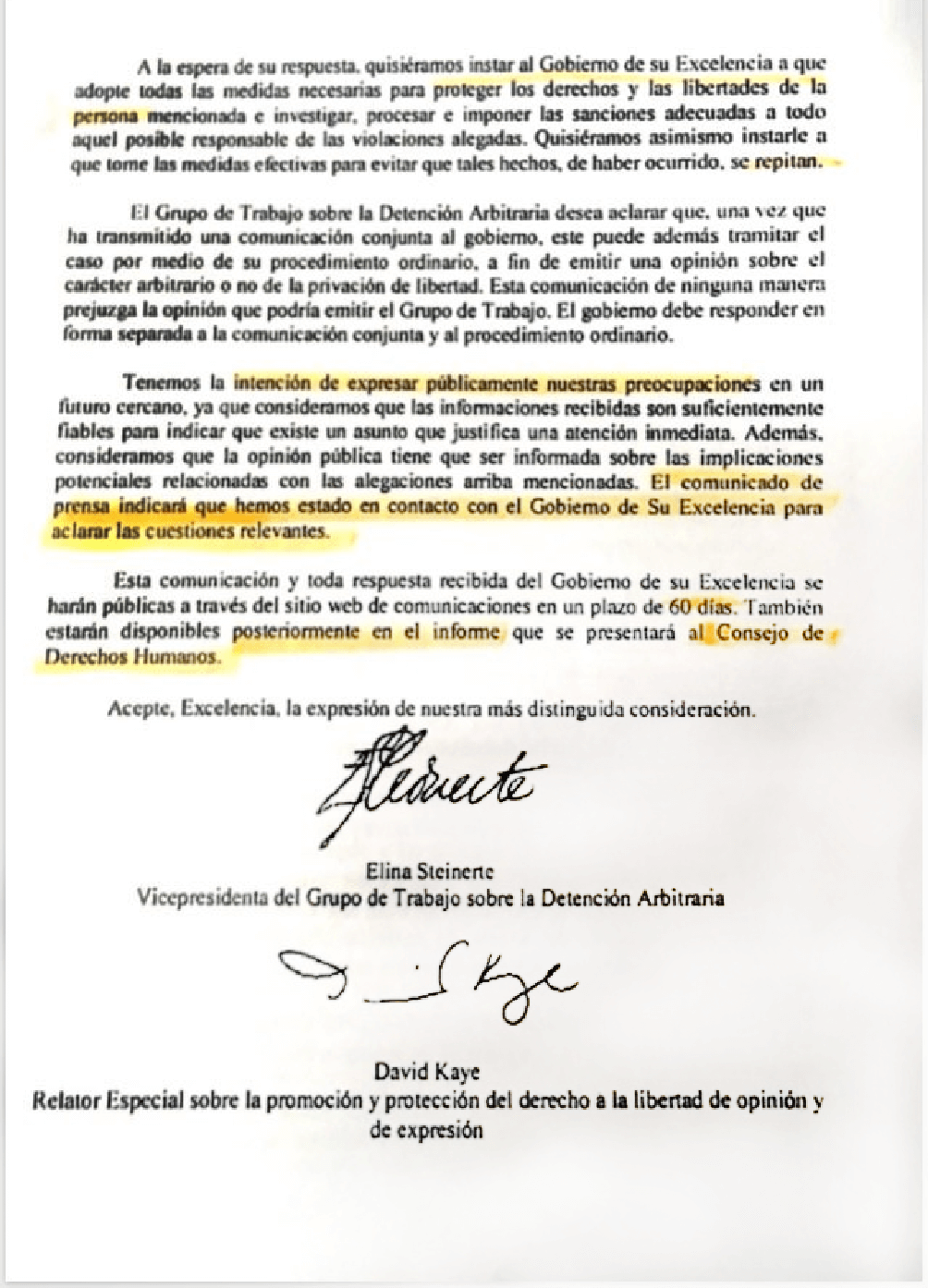