Reformulation of charges in Ola Bini's case. The irregularities continue 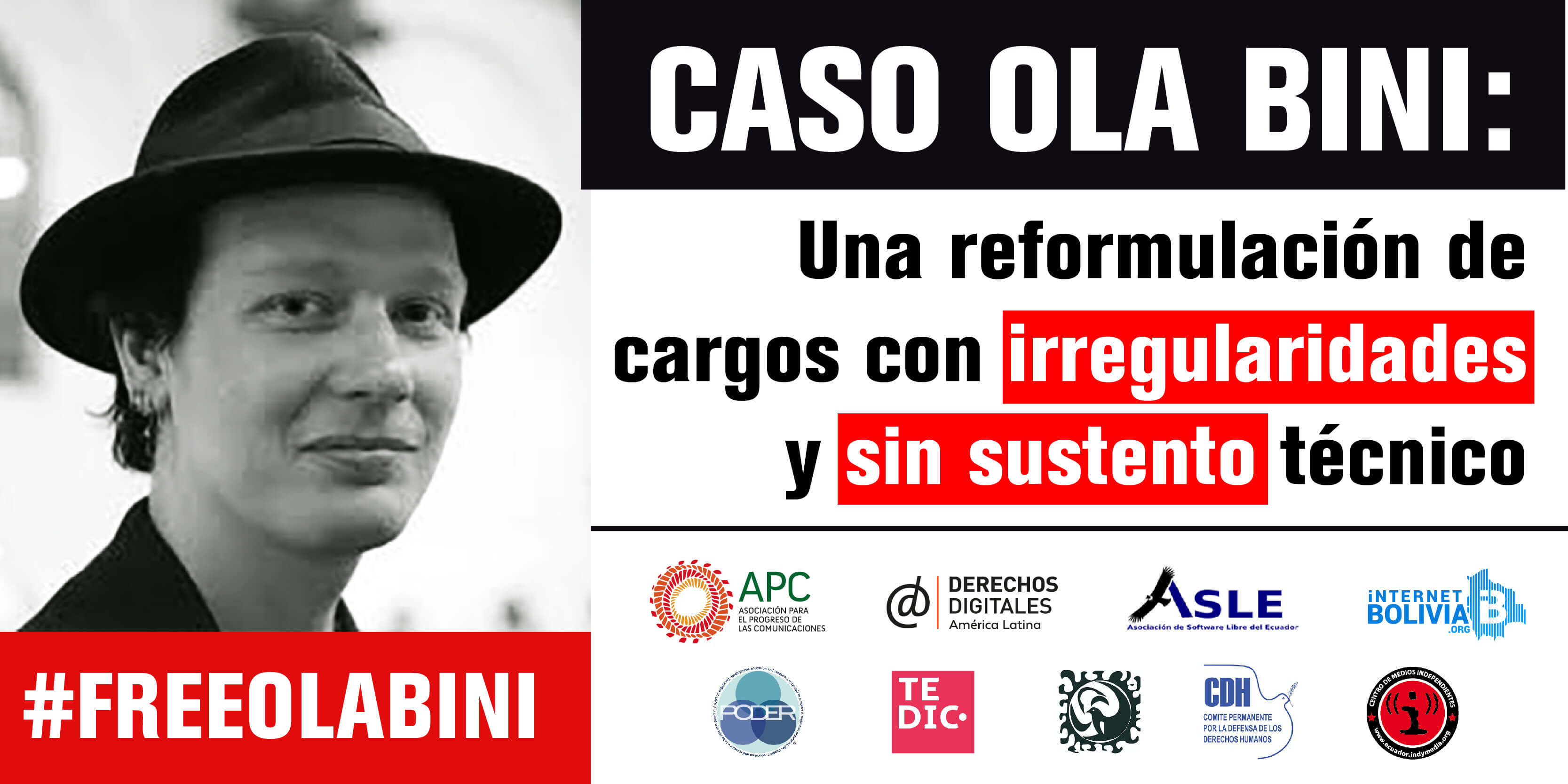 Ola Bini, a free software activist, human rights defender and digital security expert, has been subject to legal proceedings in Ecuador since April 2019. So far, a wide range of organizations around the world have denounced that there is political motivation in the indictment and that the case is marked by serious violations of due process.1

Given this background, various Ecuadorian and international civil society organizations took the decision to attend the hearing on the reformulation of charges that took place last Thursday, August 29th. During the hearing, the Public Prosecutor requested that Ola Bini be charged with non-consensual access to a computer system (Art. No. 234 of the Comprehensive Penal Code of Ecuador), dismissing the original indictment: attacking the integrity of such systems (Art. No. 232 of the Comprehensive Penal Code of Ecuador). The primary evidence presented to justify the change, is a photograph from 2015 that is supposed to prove Bini's unauthorized entry into the system of the National Telecommunications Corporation (CNT).

It should be noted, that this hearing took place just two days before the end of the prosecutorial investigation period, which legally cannot last more than 120 days (Art. No. 592 of the Comprehensive Penal Code of Ecuador). However, the law stipulates that after a reformulation of charges, all investigations must be extended by 30 days (Article No. 596 of the Comprehensive Penal Code of Ecuador). Using as a subterfuge that the object of the crime and the penalty in the new charges are similar to the original ones (a distinction that the law does not make) such an extension did not take place. As a consequence, Bini did not have the additional 30 days to prepare a defense against the new accusation, but had but 2 days, which constitutes a violation of his right to a defense. In this regard, the Constitution of the Republic of Ecuador in its Article 76, Numeral 7, Subsection "b" establishes, that every accused person must have "adequate time and means for the preparation of his defense". This violation of due process also violates international treaties and conventions signed and ratified by Ecuador and applicable jurisprudence, such as the case of Fermín Ramírez vs Guatemala.

The prosecution argued that the photograph presented would prove Bini's non-consensual entry into the CNT's computer system. However, there are two issues that attract scrutiny. Firstly, that said photograph was leaked to the press before it was included in the case-file, and before the legal defense had access to it.2 Secondly, that said photograph, according to the Electronic Frontier Foundation (EFF), shows neither violation nor unauthorized access to a private server.3 However, during the hearing, there was an evident lack of technical knowledge in the matter on the part of the Attorney General's Office and the judge responsible for the case, who proceeded to the reformulation.

Lastly, we are concerned that Bini was originally deprived of his liberty for 70 days on the basis of public statements by the current Government Minister, María Paula Romo, and President Lenín Moreno. According to the authorities, Bini was part of an alleged Wikileaks conspiracy to destabilize the government, carried out by Russian hackers residing in Ecuador. This reformulation of charges denies such accusations -that have also been questioned by Amnesty International- confirming that we are dealing with a case of a political nature and tainted by multiple violations of due process.4

We will continue to monitor the case and will continue to articulate efforts to ensure that justice is served, and that Ola Bini has a trial in accordance with due process standards and where he can fully exercise all of his rights.

3 For a more detailed description of the photo in question and its content, see: https://www.eff.org/es/deeplinks/2019/08/telnet-not-crime-unconvincing-prosecution-screenshot-leaked-ola-bini-case