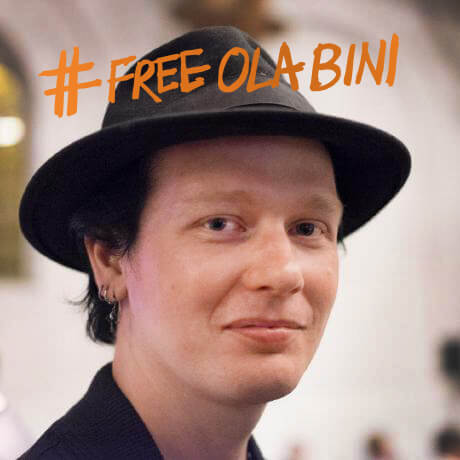 After consultations that were recently held within the framework of the XII Latin America and Caribbean Internet Governance Forum (LACIGF12), an agglomeration of organizations that defend human rights in the digital realm, (APC, Derechos Digitales, EFF, Internet Bolivia, Intervozes, and Karisma), have drafted and signed a joint statement against the ongoing political persecution of Ola Bini in Ecuador.

The statement is this:

Ola Bini is a renowned free software activist and an expert in digital security. Since April 11th, 2019, he has been subjected to a legal proceeding in Ecuador, accused of having violated computer systems. This legal case, however, has been widely questioned because of the profusion of irregularities that were committed and because the case is under immeasurable political pressure.

The first of the aforementioned issues, was confirmed by the Habeas Corpus writ that was granted last June, by of the Provincial Court of Pichincha and the second, by the timely statements that were made by the Special Rapporteurs on Freedom of Expression of the Organization of American States (OAS) and the United Nations (UN).1 2.

For its part, the Electronic Frontier Foundation’s (EFF) International Mission recently dispatched a delegation to Ecuador, and after having consulted on this case with politicians, academics and journalists of different proclivities, has concluded that the motivation behind Ola Bini's case is indeed political, not criminal.3 In fact, it has still not been disclosed which computer systems he was initially alleged to have violated.

This, compounded with a number of recent developments, have prompted new alerts. Firstly, a new person has been linked to the case, simply because he had a professional affiliation with Bini and also despite the fact, that the legal elements necessary for compliance with this formality were not presented at the respective hearing. Additionally, the prosecutor in charge of the prosecution, has decided to open two new fields of query in the probe against Ola Bini: one is for "tax fraud" and the other, is for alleged "influence peddling". Thus, it appears that the prosecution now intends to investigate Ola Bini for up to two more years.

The latest legal developments suggests, that there is no evidence to support the accusations that were originally made against Bini and that the attention of the justice system and that of the Ecuadorian government is not focused on a crime, but rather on an individual. This leads us to confirm the concerns expressed by some international organizations that work for human rights in the digital realm, that from the outset of Ola Bini's arrest, had warned about the spiral of political persecution against an activist of international standing, whose work is globally recognized in the field of the data privacy protection.

Considering the above and the consultations held in the framework of the XII Latin American and Caribbean Internet Governance Forum (LACIGF), the undersigned reject the persecutory scenario mounted against Ola Bini, and demand that due process be respected by all state functions, and urge that political actors stop interfering with the judiciary.

The full statement can be found here.

This latest alert has been confirmed now that the Ecuadorian state prosecutors are attempting to initiate two new fields of query in the existing probe against Ola Bini; the latest are for alleged “tax fraud” and for “influence peddling”.

This latest decision, is indicative that there is no evidence to sustain the initial accusations that were made against Ola Bini (for alleged attacks on computer systems,) as well as a manifest pursuit of an individual instead of an actual crime.

We invite you and your organization to add your signature to the following statement.